This positive endorsement came following Ecosol Turfcare’s treatment of all 18 greens at Dunwood Manor, Hampshire back in 2002. Jason was faced with greens built to no particular specification on predominantly heavy clay with only a partial drainage layer and “dubious” rootzone. As a result, the greens were often unplayable, soggy, puddled and with poor grass growth on the surface.

The Drill n Fill was able to punch through the top 30 cm down into the gravel and shingle drainage layer. Helped by the sand/sportslite backfill which aided percolation, water was able to filter through the multiple drilled ducts, off the surface and into the drainage layer. The results were both speedy and satisfactory. “Even the greens without any drainage layer improved,” adds Jason. They became firmer and the grass was much better because the drier surface resulted in less disease. 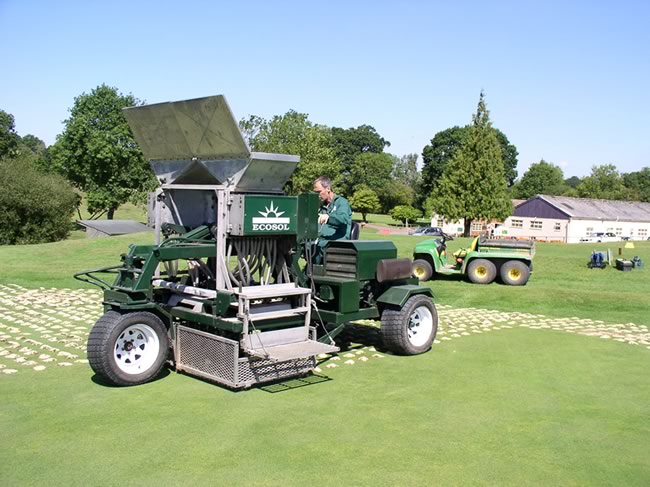 Jason is now responsible for nearby Bramshaw G.C. which had almost the same problems and similar construction to Dunwood Manor. Ecosol has just returned in August 2010 to Drill n Fill five greens at Dunwood  Manor and a further 12 on Bramshaw’s two courses. Drills went to a depth of 31cm and were backfilled with  an 80:20 mix of sand and Ecosol’s zeolitic soil amendment, Sportslite.

Just a couple of weeks on and the operation has already brought results, says Jason. “I was on holiday and I got a phone call saying we’d  had an inch of rain in an hour one morning – well, they were mowing that afternoon!”

Now he has the budget for a rolling programme of Drill n Fill on all his greens. “Drill n Fill is a cost-effective option which keeps the greens in the state we want them without having to go for expensive reconstruction which would have been the only other alternative,” he says. And, it’s not just the operation which is satisfactory… “Ecosol are one contractor we never have to worry about,” says Jason. “They have a brilliant work ethic, the job’s always neat and tidy and they are great at what they do.”