Bath Rugby’s famous ground at The Rec is looking good

Bath Rugby’s famous ground at The Rec is looking good after the season’s first fixture, a double header involving Newbury and Edinburgh, towards the end of August.

Three years into the renovation and maintenance partnership with Ecosol Turfcare, Bath head groundsman, Darren Ball, is delighted with the work. “At the end of last season, the pitch was shot to bits, with the surface full of holes,” he said. Ecosol Turfcare went in in May, with the Koro Field Top maker which strips the top of the pitch, removing all vegetation and rootzone down to 30mm. The pitch was regraded to remove high and low spots and top dressed with 100  tonnes of 50/50 rootzone. A further 80 tonnes of sand was applied with the Blec Sandmaster to create 12mm wide sand slits which help speed water off the surface. Reseeding took place immediately and despite a very dry summer and the occurrence of public events on the pitch, the grass flourished. 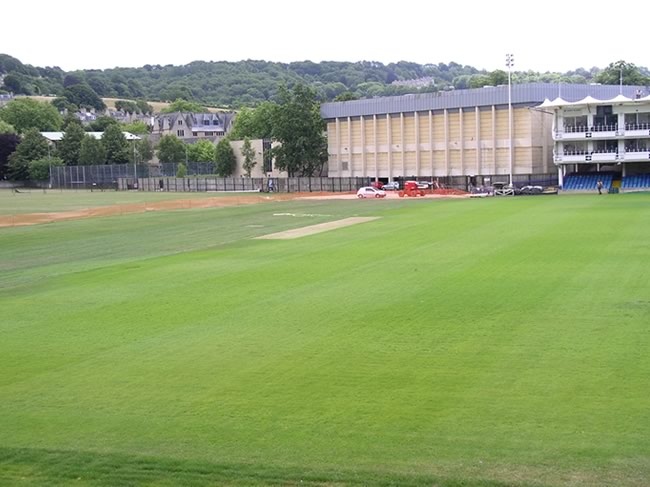 “It’s come back really well, “ said Darren. “It was a radical treatment but there’s no question it’s done better than it would, had we not removed the old surface. Following those first games and a lot of rain on the Sunday night, it’s held together well.

Ecosol Turfcare also installed a perimeter drain on the river side, by the  Wadworth and Hampton stands, which kept the ground dry after the torrent and will be replacing the artificial grass in front of the subs’ seats before the first league game on 11/12 September. The company also took care of the training ground at Lambridge, carrying out aeration, decompaction, overseeding with Barenbrug Bar 7 grass seed and applying fertiliser in preparation for the new season.

“We are really happy with the Ecosol team and the work they’ve done for us,” said Darren. “Being a local firm is a bonus because they can respond quickly and they take a pride in their work.”

Our photo shows the newly seeded pitch in July 2010.