Ecosol Turfcare added another string to its bow during the depths of winter 2010 – snow clearance!

At a time when big match cancellations were widespread – resulting in dissatisfied fans, players’ fitness suffering and money being lost, Ecosol was able to help its clients Swindon Town FC and Bath Rugby to host important fixtures.

Swindon Town contacted Ecosol in the middle of the snow event, saying that players were going stir crazy because fitness work had to be confined to indoors. Would it be possible to clear 30 cm of snow off the training ground? Ecosolve’s MD, Bretton King, decided to take on the challenge, shipping a team of four with tractors and trailers to clear the snow off the Liddington pitch.

The success of that operation so impressed Swindon’s directors, they decided, one day in advance of the planned Gillingham game, to take a chance on the County Ground, because due to the weather, cancellations were mounting up and everyone needed a game. With Ecosol’s tractors and trailers parked on the pitch perimeter to minimise surface damage, all Swindon’s staff and an army of volunteers got to work with snow shovels and wheelbarrows. At 4.30 pm on the Friday, head groundsman Marcus Cassidy, went out with the white liner and the game went ahead the following day. The pitch played well and Swindon won 3 nil – a great result for all. 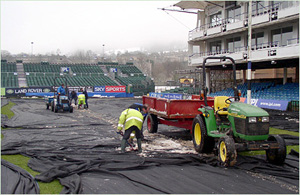 Meanwhile, down the road at the Rec, Bath Rugby was struggling with 15cm of snow on top of its frost covers and an important Heineken Cup fixture looming. It was to be screened live by Sky Sports and cancellation was not an option! “Leaving the covers on for an extended period would have severely damaged the viability of the grass, because no light was getting through,” said Bretton King. Once again, Ecosol decided to act and with a small team of 20 volunteers, including officials, they were able to pull the groundsheets off in such a way that the snow was rolled into sausage shapes on top and carted into Ecosol’s pitchside trailers. “The operation took a solid eight hours and was absolutely critical because had all that snow melted it would have completely destabilised the playing surface,” said King. Eight days later, the Heineken game went ahead and the pitch played well.

Ecosol Turfcare then soil relieved the Swindon County Ground and a mere 10 days after the snow shifting operation, the vital midweek clash with Leeds went ahead, with another win for Swindon and a crowd of 14,500. Not many weeks later, on 6 February 2010, Swindon hosted Charlton Athletic for a top- of- the -table clash in a promotion playoff championship game. Throughout the match, the BBC radio commentator was heard to compliment the condition of the pitch at County Ground – another coup for Ecosol!

“At a time when clubs all over the UK were unable to host vital matches, we were delighted to put all our resources into helping two valued clients,” continued Bretton King. “There were difficult decisions to be made and tight deadlines, but the team effort was marvellous. Snow clearance is not normally in our portfolio of maintenance services, but we are flexible enough to be able to respond quickly and the experience has been valuable for the future.”