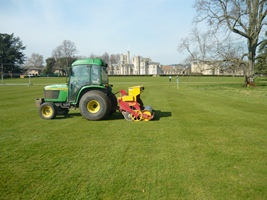 Kerry Mapp, Head of Grounds and Gardens, contacted the Wiltshire-based company after seeing the range of services that Ecosol Turfcare offer and was particularly attracted by the Vredo disc-drill over-seeder. "We used a dimple seeder last year and whilst the machine was very good, we found that the dry Spring and Summer of 2011 played havoc with the rates of germination and establishment that we would ordinarily expect. After that experience, and seeing that similar conditions were looming for 2012, I had no hesitation in contemplating the use of a disc drill." Kerry added "I have known about Ecosol Turfcare for a while and when I saw that they had the Vredo I contacted Bretton King immediately to discuss what kind of service and operation he could provide us with. As the saying goes - the rest is history!! We were delighted with the workrate that they did for us and the seed is all where it should be - safely placed at 12mm deep and with soil firmed around it."

The alarming increase in seed costs for 2012 has made people re-examine the germination percentages they are getting behind any drill, and if the seed is left exposed or lying on the soil's surface, it is very susceptible to dry weather and vermin. The beauty of the Vredo Compact is that each coulter precisely places the seed 12mm below the playing surface in a groove carved open by a pair of discs. Following a matter of inches behind is a flat roller (that can have water added to it to add ballast if necessary in very hard ground conditions) which immediately firms the soil around the seed. This firming action is a key addition to the seed's placement as it makes sure there is good seed-to-soil contact which helps accelerate germination rate and ensuing establishment time. It also makes sure that any moisture present in the soil is retained and available for absorption by the seed. Without this firming action, the slit would be an open, gaping line that is susceptible to drying out, thus preventing the seedling from establishing as rapidly.

The final word goes to Kerry Mapp - "We need rapid germination and establishment because we have to turn our winter games pitches into cricket outfields within a matter of weeks. With that pressure on time, we need seed to be in, germinating, emerging, establishing and flourishing towards maturity as quickly as possible. The use of Ecosol Turfcare and their Vredo Compact and John Deere tractor on floatation tyres has given us the best possible opportunity to get recovery and new grass established on our well used pitches."