Swansea City AFC secured their Premiership status in late March and immediately authorised Ecosolve Ltd. to undertake major renovations of the Club's Llandarcy training facility as well as their newly acquired Football in the Community venue at Landore, close to the Liberty Stadium. 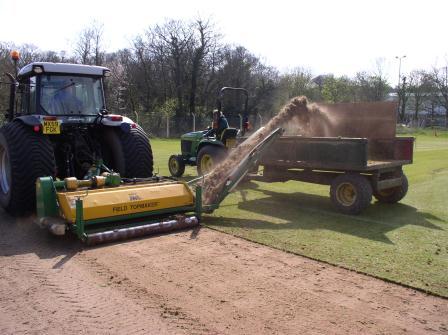 With Premiership status secured for 2012-13, Swansea City AFC's chairman, Mr. Huw Jenkins, swiftly began the process of planning for the season to come by instructing Bretton King's company to proceed with renovation work that had been drawn up after weeks of discussion with the Club and its head groundsman Mike Kayes about the playing surface demands for the new season.

The Llandarcy site had been suffering from the cumulative problems posed by Poa grass species that thrive in the Atlantic weather-induced climate surrounding the Neath Valley location for alarge proportion of the 2011-12 season, so its removal was vital. Bright and early on 2nd April the equipment swung into action and the 1.6 hectare site was Koro'd off within 36 hours.

This was quickly followed by the spreading of 300 tonnes of medium/coarse sports sand in preparation for a thorough amelioration process. This element of the operation was perhaps the most critical component because the native soil type was largely responsible for the proliferation of the meadow grasses that caused the issues of surface stability. The site was drained four years previously with laterals spaced at 10 metre centres, backfilled with 6 - 10mm gravel and a blinding layer above that, all of which worked very well when the water could reach these conduits. however, the local soil is a heavily silt contaminated one, which constantly challenged Mike Kayes when it came to retaining soil structure and natural percolation of that soil. Coupled to the problem of poor drainage rate was the contamination of the upper 150mm of soil with stone and rock of varying sizes, which caused damage to machinery and posed threat of injury to players - who were high value and worth millions of £'s. These factors meant that amelioration was vital and a report by independent consultant Alan Lewis highlighted the need to improve soil texture if drainage was to be improved.

Amelioration was carried out using a 3 metre KUHN HR3004 heavy duty power harrow, which incorporated the sand to create a consistent sand/soil mix to a depth. The inevitable stone and rock emerged in this process but this was anticipated - the use of a BLECavator stone burier was a consideration but the levels of the site were good, with correct levels of gradient and surface smoothness, so the use of the BLECavator was discounted. It was also vital to retain surface firmness and the rotovating action of the BLEC would have helped introduce a lot of air to the soil profile which would then lead to a greater degree of unmanaged settlement which could destroy surface levels. This had to be a considered factor because the site had a deadline of "Players back in training on the 1st July", so risk management had to be accounted for too. 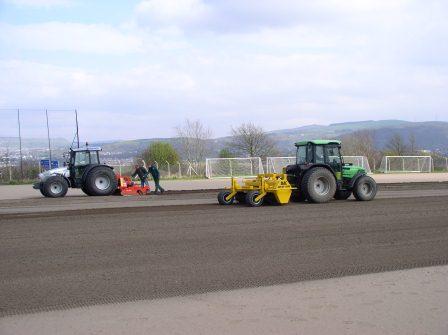 Once amelioration had been completed, a BLEC SR8 stone rake was used to de-stone the site, as well as manual stone picking (which on its own resulted in over 3 tonnes of stone and rock being removed). Following this operation a John Deere 4600 on floatation Galaxy tyres and fitted with a BLEC T6 Harley Power Rake graded and firmed the site in preparation for re-seeding. Further stone removal was done and finally on 13th April the same John Deere 4600 seeded the site using a Vredo Compact 218.075 disc drill, performing four passes across the site so that an overall seeding rate of 65 grammes per square metre was achieved. Barenbrug BAR 7 grass seed wa scarefully selected for the site as it had performed well in the preceding 3 seasons when used in the over-seeding programme, and it's characteristics were proven to work and shine through on those ocassions so its selection was preferred. The use of a disc drill might be viewed by some as a strange choice and that a Turfmaker initial seeder would be better - this was the primary option, but discounted once weather patterns for mid-April were considered, and the decision has proven to be a wise one.

The notoriously wet weather - so often seen in this area - returned with avengeance in mid April and the anticipated seed-wash was considered too high a risk if a Turfmaker had been used. The Vredo placed the seed 12mm into the soil and upon emergence in w/c 16th April, some very minor seed-wash was seen. By Friday 27th April, torrential rain had been experienced for a week, and yet seed is now well established with the four different drill directions clearly visible. A further over-seeding will follow in June, but in the meantime, Swansea City are well on track with their new surface at Llandarcy.