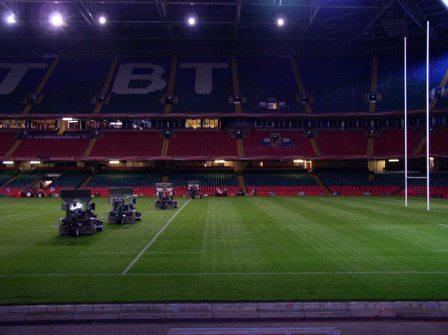 The home of Welsh Rugby hosted Olympic football this summer, but the unique "portable" pitch needs intensive attention to prepare it for the forthcoming season.

The stadium turf is unique in that it is grown on removable pallets under a closable roof. In the past a sand-based turf was used for its rapid drainage  properties. In the early days the grass looked sparse, the grid pattern of the pallets was obvious and the television image it provided was not the best. However, in the hands of head groundsman, Lee Evans and his team using local knowledge and getting to understand the palleted system, the turf improved.

This past season, Ecosolve  had an input into the presentation of the pitch with our unique Drill n Fill aerator. The pressures of the international sport obliged Lee Evans to employ a different turf management system in autumn 2011 when playing commitments and public usage demanded  he swapped the  sand-based soil to a heavier one, despite its inherent poorer drainage.

Traditionally, the palletised pitch is changed twice a year and Lee was just about to do it last autumn when the Welsh Rugby bosses asked him to hold fire. Wales had been doing so well in New Zealand, that they wanted the Rugby World Cup quarter and semi finals to be shown live on giant screens to the adoring public sitting  in the Millennium Stadium. This duly took place but meant that time to establish the new pitch for the Wales and Australia game on December 5th was really tight. "The traditional sand-based turf would not have produced the correct results in the time available," said Lee, "so we opted for a heavier silt and clay-based turf which we knew would grow well and produce the surface stability required, but would not drain sufficiently." 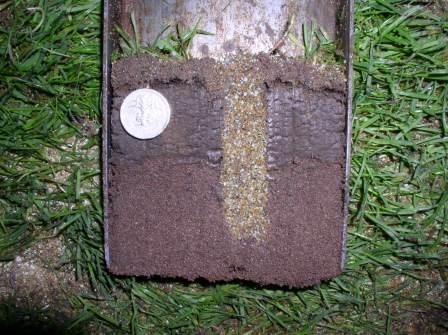 The Drill n Fill aerator had been successfully trialled in April 2010 and was the obvious  answer to improve drainage.  Two days after the match, Ecosolve went into the stadium with a team of four machines fitted with custom-made drills and depth limiters  to accommodate the pallets. A bespoke blend of sand and zeolite was used for the backfill, designed to enhance infiltration and percolation rates. "Afterwards, we top-dressed and overseeded and the resulting turf was excellent," Lee  reported. The operation was repeated at the beginning of September 2012.

"It’s the only stadium in the UK which has to use turf as opposed to other stadia that can establish their surfaces from seed," explained Lee. "The pallets have to be changed twice a year and we don’t have time for seeds to take". The pallets of turf are taken in and out to allow for other events which can range from moto and equestrian sport to a massive charity dinner. Management of the roof is also crucial. "We can’t grow grass in the dark" said Lee, but he can prevent some of the heaviest rainfall landing on the pitch – it is a delicate balancing act experienced by very few British groundstaff.

The Welsh rugby game went through a purple patch last season thanks to the national team landing the Grand Slam after a successful Six Nations campaign in 2012. The Millennium Stadium provided a magnificent backdrop to some of those matches and the excellent state of the turf did not go unnoticed by commentators and teams.

Several months on from its high pressure winter, Wales No 10 Rhys Priestland  was still able to judge it as "superb" after several hours’ pre-Australia summer tour kicking practice - training which always requires a decent surface underfoot. "We don’t often get players commenting on the pitch," said Millennium Stadium head groundsman, Lee Evans "but this team said it was the best stadium pitch they had played on."

The Drill n Filled turf was challenged several times during the past rugby season and came through with flying colours. "By the time we came to the Wales vs France game, we were fielding one of the best surfaces in the tournament thanks to the combination of the heavier turf with the action of the Drill n Fill" he said. The treatment  allowed surface water to rapidly percolate down through the 125mm deep rootzone.

It was a fortuitous combination, all the more because during the final Six Nations fixture last February, the French insisted on the Stadium roof being open. "One hour before kick-off, the heavens opened and John Inverdale was doing live feed for the BBC in a tempest," Lee recalled. He was worried momentarily, but "it drained like a dream which would not have happened had we not used the Drill n Fill." Wales duly won the Grand Slam and are hoping for good results this season with the help of Drill n Fill!