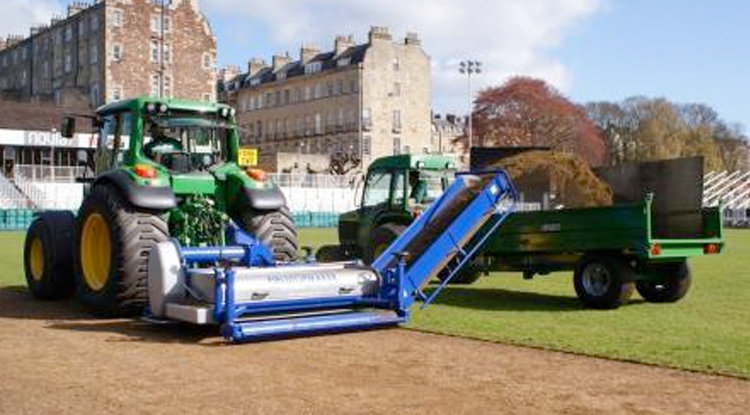 One of the first KORO by Imants FTM Terraplane machines made its UK debut with Ecosol Turfcare at Bath Rugby's famous Recreation Ground stadium last week, as season-end renovations got underway at pace beside the River Avon.

Following a busy season that has seen Bath Rugby reach the Amlin European Challenge Cup semi-finals and recently seen the defeat of long-time rivals Leicester Tigers at The Rec, the pitch was ready for renovation and this operation kicked into gear in the last days of April amid glorious weather.

Having had a philosophy of always keeping at the forefront of turfcare technology, Ecosol Turfcare's managing director Bretton King took possession of one of the latest Koro Terraplane Field Top Makers just days before Bath Rugby's renovation was to start, stating "Our clients are always trying to present the highest standard of pitch for their players and I know that we have a role to play in achieving that. It was therefore not too difficult for Ian Pogson of Campey Turfcare to convince me I should have a Terraplane rotor rather than the conventional digging rotor on our new machine - and I am so pleased we opted for that Terraplane." Bath Rugby's Rec was the machine's first outing and the difference to surface cleaning and level reinstatement was immediately apparent after 2 or 3 bouts of work.

The Koro operation was completed in under a day and following this the pitch was decompacted with an Imants Shockwave, top dressed with sports sand dressing, ameliorated using a combination of Aeravator and hollow tine techniques, graded, fertilised and finally re-seeded with Limagrain's MM60 supplied by Simon Hinton of Sherrif Amenity. The re-seeding was performed using a Vredo disc drill as well as a customised BLEC MultiseederII which has been modified to improve seed distribution on bare-soil surfaces. 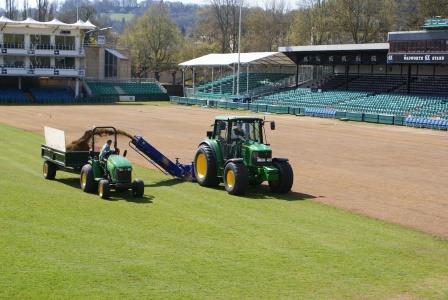 "I have been really pleased with the way the Terraplane-shod KORO has performed on it's first piece of work. It set our renovation operation off at pace and Bath Rugby's Darren Ball has been really pleased with the improvement that has brought to the renovation as a whole." stated Bretton, adding "If it continues to perform like that, I can see many people specifying the Terraplane rotor KORO over and above the usual digging version because it leaves such a clean surface"

The whole renovation was complete in under three days, proving that good equipment used properly and with the correct sequencing of operations can turn pitches around swiftly and have new turf established quickly.