Yeovil Town FC up their game

Yeovil Town FC tasted the sweetness of success at the end of last season, securing a promotion to the Football League Championship. The comparatively small Somerset football club notched up victory over Brentford at Wembley to secure the final promotion spot from Division One and move up. 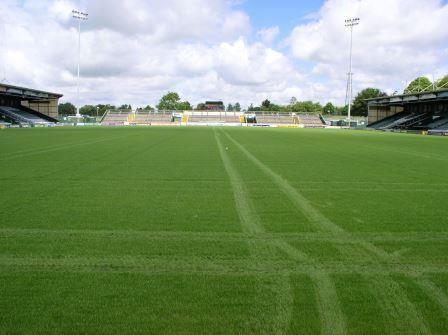 The club has also upped its game on the pitch management front, calling in Ecosol Turfcare for end of season renovation on the training pitches at Alvington and the Huish Park Stadium pitches. We put together a detailed programme for each surface, began work the first week of June and judging by the close-up on ITV news recently, the grass is already looking great!

“We were pleased to be contacted by Yeovil Town,” said MD, Bretton King “and our hope is to improve all their pitches this year and forge a long-term relationship with the club.” Huish Park Stadium’s pitch had an unstable playing surface due to a preponderance of the wrong type of grasses and poorly incorporated top dressing materials.

Ecosol Turfcare used the Koro FTM Terraplane to fraise mow Huish Park deep enough to remove the Poa meadow grass and existing sward before it was then dressed with 90 tonnes of 70:30 top dressing, as well as Ecosol’s zeolitic amendment, Sportslite. Hollow tining and “aeravation” was carried out to mix in the existing dressing and rubber crumb (which had been applied during last year’s renovation) with the pitch’s native sand-based rootzone, thus providing a thorough amelioration.

Goalmouths, centre circles and side line areas were re-levelled and dressed. We then used the Shockwave rotary decompactor to bring air into the soil and relieve compaction and panning before re-seeding the pitch with British Seed House’s (BSH) A20 at a rate of 48gm/m² through a single pass with the BLEC Turfmaker and three passes of the Vredo disc drill seeder. Finally BSH 10-15-10 fertiliser was applied at a rate of 35 gm/m2. The grass was up within 4½ days and now as our picture shows, the stadium surface is a healthy green haze.

Three training pitches at Alvington and Huish Park received a slightly different programme as they had to be back in use within two weeks of the renovation. To meet this demand, each pitch was scarified with a double pass of the Amazone Groundkeeper at a depth of 5mm to clean out the pitch surface and sward, followed by Shockwaving for decompaction and aeration. They were then hollow tined with a triple pass to increase the drainage pathways and help incorporate the top-dressing of 1WS sports sand. The pitches were then overseeded with BSH A30 seed using the Vredo disc seeder and fed with 10-15-10 pre-seed fertiliser.

“We are absolutely delighted with Ecosol Turfcare’s end of season renovation proposal and the way in which the work was carried out,” said John Fry, Yeovil Town chairman. “Ecosol did a brilliant job, the best we’ve had . They obviously have a passion for the job which is reflected in the care, interest and continuing customer service they are giving us.

“The training pitches are coming on well, the players are happy and we are looking forward to playing our first match in the stadium against Swansea City on 19 July.”

“As this club continues to develop and play a higher standard of football,” added Bretton King, “ it will require top quality pitches which we are well on the way to helping them provide.”