Denham drains like a dream after DRILL n FILL

Drill n Fill aeration can work wonders on Britain’s old golf courses which can be  a nightmare for course managers who  find themselves running out of options.

This was the case at I00 year old Denham Golf Club which began a regular programme of Drill n Fill in 2006 and has just completed its third pass. 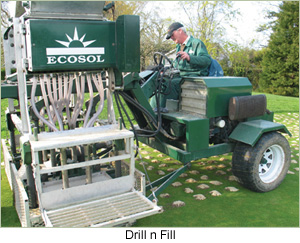 “Members were exasperated with unacceptably soft greens,” said  Course  manager, Guy Jenkins. Five years ago, he was finding it more and more difficult to calm the   disgruntled  750 strong membership who were getting fed up with  playing on temporaries. His course was built with push-up greens out of a sandy soil. Although it may have drained well in the early part of its life, organic matter put on the greens over the years was very absorbent and slowed water movement. Subsequent verti-draining had been rendered ineffective because the fines from the   top dressing persistently capped all the holes, explained Guy. “As a result, there was compaction, puddling, standing water and poor grass growth. When the greens got wet, they stayed wet.”

But just when he reached that low point, Guy decided to enlist the help of Ecosol Turfcare’s Drill n Fill. The aerator was making its mark as an effective and economical trouble shooter. Drilling into turf, extracting the old rootzone and backfilling with a sand/soil amendment not only establishes a network of effectively draining ducts for the water to percolate through  but also improves the rootzone and health of the grass plants.

Guy, who has been at Denham for 10 years now was delighted. “The effect was amazing that first time, I could see it in half an hour and inside three weeks, every member of the Golf Club – not to mention the greenkeeping  staff – was happy!

Denham employed 310mm deep drills with a diameter of 20mm on the 18 greens. They used a backfill of 70;30 sand to Sportslite,  Ecosol’s  zeolitic soil amendment ,which adds a wealth of benefits to soil, including increasing cation exchange capacity, lowering susceptibility to compaction and helping grass growth by reducing leaching and retaining nutrients.

“We used a backfill specially blended for us by Bespoke Blending and Bagging, Ecosol’s own operation, because we knew it would be produced in the correct proportions and delivered when and how we wanted it. Sportslite has been excellent.” said Guy.

Ecosol Turfcare has now completed its third Drill n Fill pass over Denham G.C.’s 18 greens.   Guy’s staff   vertidrained and brushed the excess backfill back in. Despite very little rain in the three weeks since it was done, the drill holes on the greens have almost disappeared.

“Although nothing will be as dramatic as the massive effect it had that first time, Drill n Fill has continued to improve our greens,”  Guy said. He is confident that water is now moving right through the profile. “Proof of the change Drill n Fill has made is that water is shedding away from the greens  and we can see it draining out at the lowest point of the course. But that’s a nice problem to have!”

Drill n Fill  has been the catalyst to a change in the quality of the greens which are firmer and with better grass growth,  continued Guy. “In fact it has led to a marked difference in our whole regime of top dressing and cultivation. We now need less fertiliser and irrigation right through the summer which is great both for the budget and the grass plants.”

“Denham’s members are all agreed that the Club’s greens have benefited considerably from Drill n Fill,” said Club Secretary, James Tucker. “With reduced thatch, improved drainage and better root development below the surface, the greens have performed much better throughout the year. This is in no small part due to our Drill n Fill programme over recent years.” In order to maintain this status quo, the club plans to support normal maintenance with a visit from Ecosol Turfcare every four years.