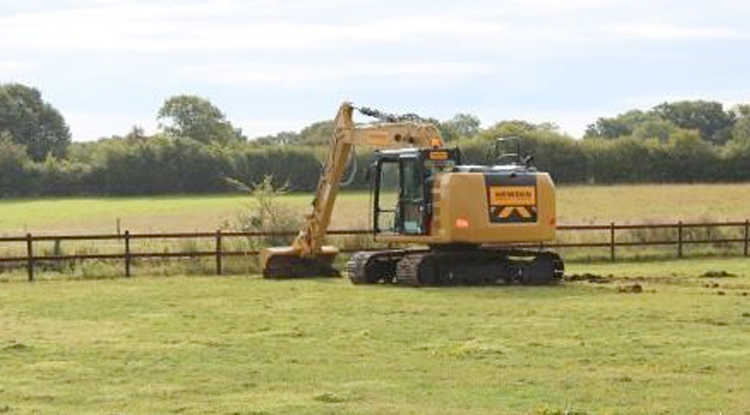 Equestrian Arenas Are Us!!

As well as turf maintenance and aeration, Ecosol Turfcare has been involved in some high profile drainage and construction projects both in Wiltshire and further afield.

New to our portfolio was the planning and building of an equestrian arena. From an agricultural field, we created a 21m x 61m fenced training space for horses, complete with a state -of-the-art silica sand/rubber crumb all-weather surface. 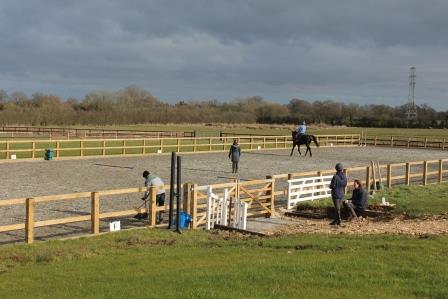 Our clients’ farm was on Wiltshire clay, bottomless in winter and rock hard in summer which made the training of horses on grass impossible. “I had visited plenty of competition arenas up and down the country”, said client, Mrs C, “and gained a good idea of exactly what we wanted in terms of size and surface. It had to be large enough for advanced dressage and showjumping on a light, freely draining surface.” 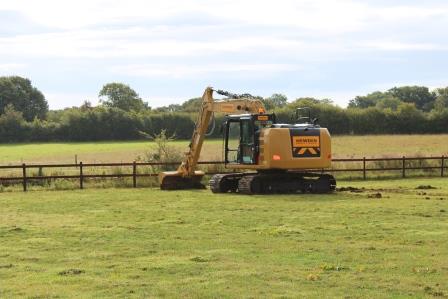 Choosing the optimum position was not so easy as the whole farm had been used for grazing animals and nowhere was without contours.   “We picked a spot which was easily accessible and enabled us to link the drainage system into an existing ditch,” said project manager, Ecosol MD, Bretton King. The slopes demanded a cut-and-fill operation and the first step was to remove grass and topsoil with a 13 tonne excavator and grade the subsoil. Levels were checked constantly due to the gradients.

“Good drainage is vital in an arena,” said Bretton,” to avoid puddling and deep going on the surface.” In winter, standing water can freeze, becoming both a hazard to horses and harmful to the sand/silica material. The drainage trenches were cut to run across the school at 5m centres with 80mm pipes put into them. A 100ml collector drain was put in outside the arena to run from the headwall to a ditch.

The next step was to fill the area with 10mm washed gravel to a depth of 150mm and laser grade it. Wooden post and rail fencing, double gates and kickboards were erected and the stone extended to meet them. We laid a non-woven membrane on top of the stone and fastened it to the kickboards. Finally the surface material was put in to a depth of 150mm and laser graded. The project was completed with the installation of a hardcore track and drainage stone around the perimeter of the arena outside the fence to protect the wood from rotting in the wet.

“The operation went smoothly and we are delighted with the results,” said Mrs C. “The arena is the envy of the neighbourhood and despite persistent and torrential rain, has never flooded. Incorrect surfaces can permanently damage horses’ legs, so it was important not to cut any corners in this construction.” 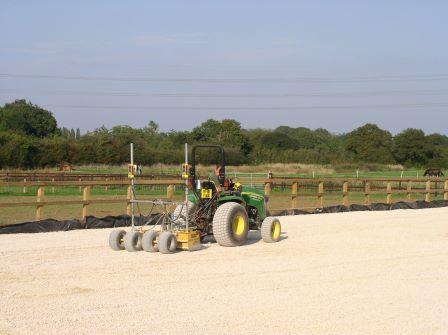 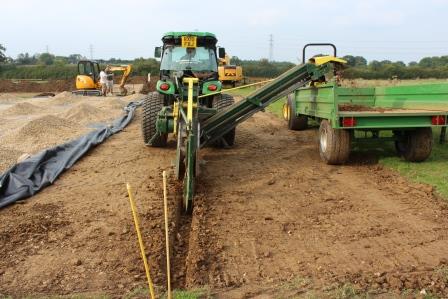