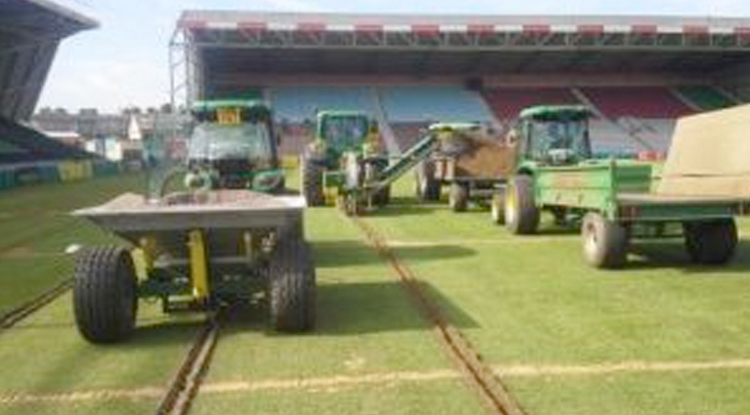 A number of major drainage projects across the sporting spectrum have kept Ecosol Turfcare busy during the course of 2015.

Installing a primary drainage system of pipes, connected to a secondary system of sand/gravel slits can give clubs more than double the average number of playing hours on their pitches during the winter season and the 2015-16 winter is really showing the worth in making such an investment. The wettest period for a number of years has really focussed people’s attention on how they can keep a club’s fixture list and training schedule in tact despite incessant rainfall.

Ecosol Turfcare has tackled football, rugby pitches and cricket outfields recently, with clients ranging from Premiership rugby to village playing fields and in one of the wettest winters on record so far, all are reporting excellent results. 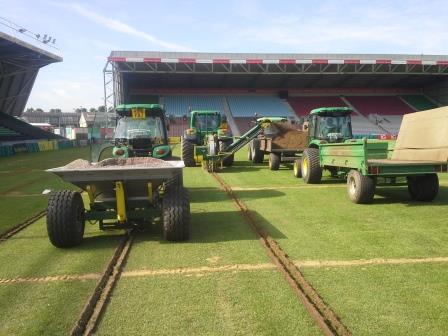 The Ecosol team spent several days in Devon this summer at Bovey Tracey AFC, whose 2,650 sq m pitch had been boggy for most of the playing season with uneven surfaces and bare patches of mud. We first regraded the surface by cultivating it with the BLECavator, then box-grading, power rotor-raking and rolling. Installation of the primary drainage system involved 80mm perforated land drain laterals at 5 metre centres, followed by secondary drainage using sand/gravel slits of 250mm depth and 50mm width at 1 metre centres. The whole pitch was then reseeded.

The Club fields two senior teams: the firsts play in the SW Peninsula East League, home of tough sides such as Teignmouth and Exeter University while the seconds contest the South Devon League. Bovey Tracey also boasts a new under 18 side this season, as well as juniors and minis. Although results have been mixed to date, the pitch has held up really well despite higher than average rainfall.

Similar good pitch performance has been noticed by Wiltshire rugby club, Devizes, which had been dogged by a heavy, wet and slow-to-drain main pitch. In conjunction with PSD Agronomy’s involvement as drainage project designers, Ecosol Turfcare were contracted to re-grade the pitch in 2014, and the following year to install a new system of primary drainage at 6 metre centres, complemented by sand and gravel slits at 2 metre centres. A new soakaway drainage system was also put in, together with a bespoke overflow ditch. The Southern Counties South title chasing club have seen a transformation in their pitch’s playability, with teams across the spectrum from U15 to Ladies and up to 1st XV all reaping the benefit of a drier and firmer surface in 2015-16.

Oaksey Playing Fields Council had long been battling with waterlogged conditions on its 1.9ha site which consists of one full-size football pitch, one three quarter size football pitch and a cricket outfield. Constructed on the notoriously heavy North Wiltshire clay, the ground was plagued by some old ridge and furrow and water was ponding on the surface. The outfield was so uneven it was unsafe to play on and the football pitch had two big depressions in it and a consistently poor playing surface. 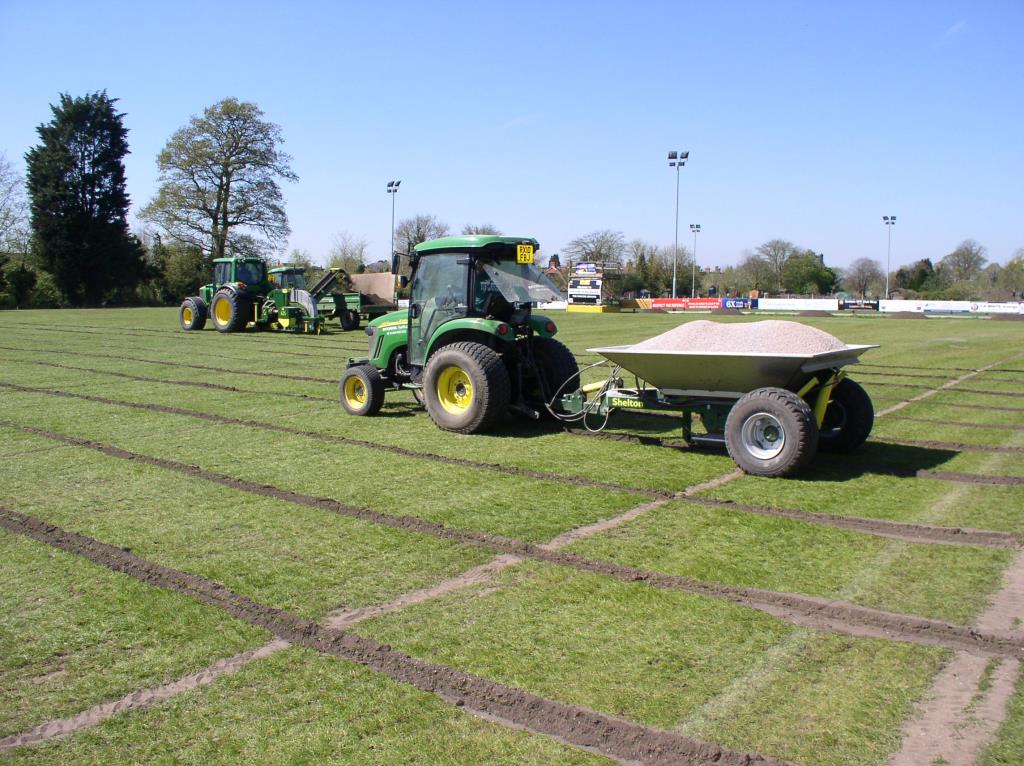 Following a competitive tendering process (conducted by PSD Agronomy) and the securing of funding from Sport England, the Playing Fields Council asked us to relevel the ground and install a drainage system on all three surfaces.

Following the re-grading operation, in which over 1,000m³ of soil was moved, we installed primary drainage using 80mm perforated land drain laterals at 5 metre centres on the full size pitch and cricket outfield during autumn 2014. The same specification of drains were put into the second football pitch, but at 7 metre centres, before the whole playing field was reseeded using Rigby Taylor R8 grass seed. Rapid establishment followed and in July 2015 a secondary drainage system on the full size pitch, using sand/gravel slits of 250mm depth and 50mm width at 1 metre spacing, was placed at 90 degrees to the primary land drains.

Oaksey Playing Fields Council is delighted with its newly renovated ground, which is at the hub of the village and in addition to football and cricket, can now be used safely by the community for occasions such as school sports days and the village fete. 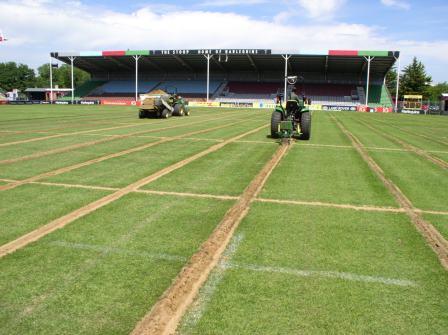 Premiership rugby title contenders Harlequins were keen to capitalise on improvements made through our involvement in 2014 at the Twickenham Stoop stadium. For 2015 additional drainage was added to reduce lateral centre spacing from the existing 7 metres to 3.5 metres. The primary system used 80mm perforated land drain connected into the recently replaced 100mm main drain which had been laid in 2013. Then we added sand/gravel slits of 250mm depth and 50mm width to increase the density of spacing from the former 2 metre centres to new 1 metre centre spacing.

Finally, the pitch surface was Koro’d off and localised levels adjustments were made, before sand spreading and amelioration took place. The pitch was then reseeded for the new season using Germinal A20 grass seed at a rate of 50gm/m².