Under 10 weeks from the start of next season, Ecosol Turfcare went on site to remove the grass playing surface with the Koro Terraplane Rotor to a depth of 12mm, following that up with our Shelton Super Trencher, gravel cart, pipe layer and Sandmaster to renew various elements of the ground’s 30 year old drainage system. 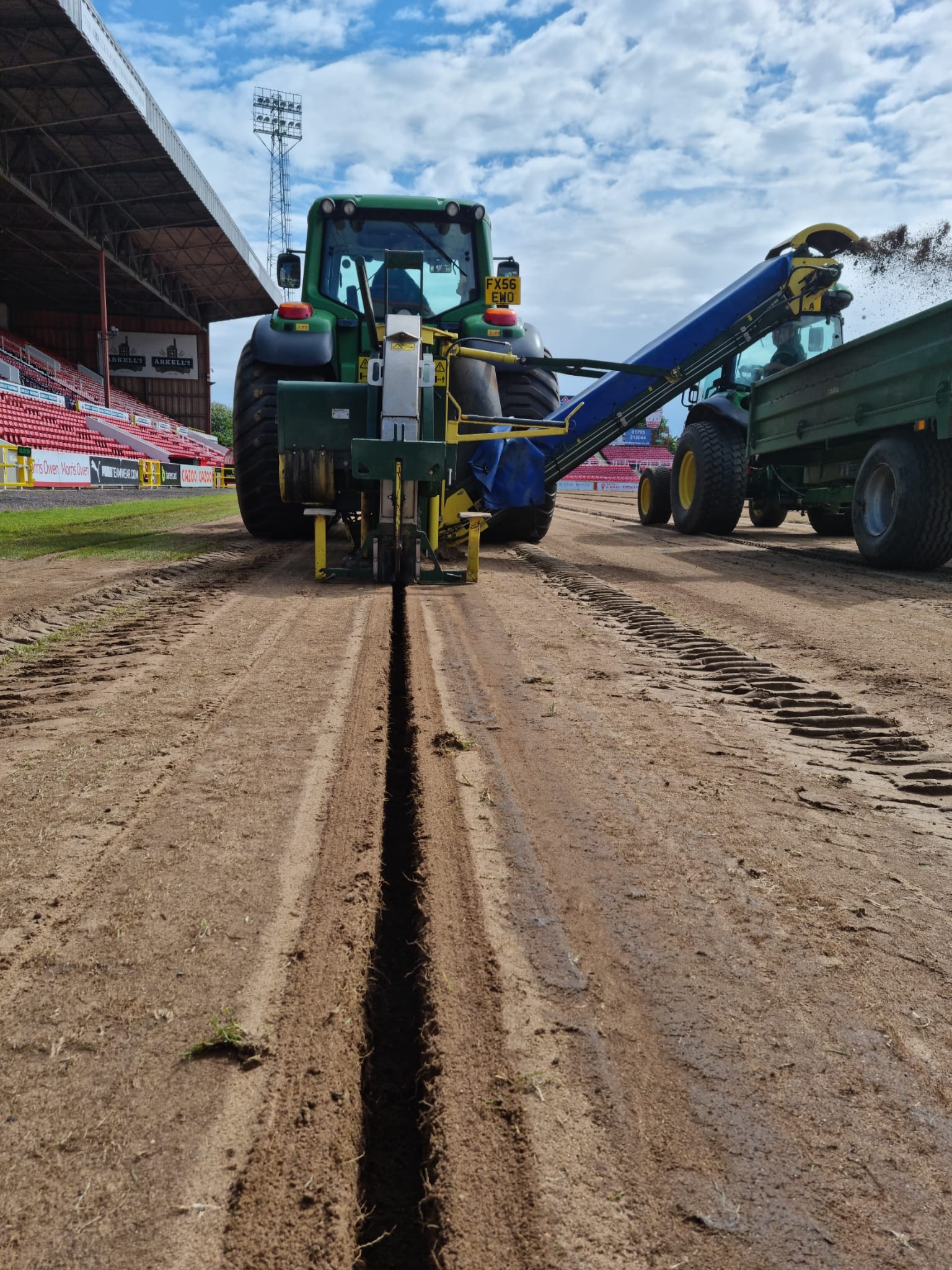 “It’s way more than we usually do,” said head groundsman Marcus Cassidy, “and while the pitch didn’t actually have puddling on the surface, water removal and grass growth were poor.” He noticed that following heavy or prolonged rainfall, some areas retained water and others became very soft. “This obviously affected the condition of the pitch and how the football team wanted to play.”  The Club had known about various blockages and collapses in the drainage pipes since 2011 and needed to address this as part of the quest towards future League promotion.

Existing drainage of the County Ground comprised 2 x 100mm main drains, one  going down each touch line with 40 herringbone lateral drains at 5m centres constructed with 50mm perforated pipes. After preliminary investigation, Marcus and Ecosol Turfcare MD Bretton King decided that the most appropriate course of action was to remove the old main drains and expose the 50mm herringbone laterals.

With these laterals accessible, we jetwashed the herringbones, flushing over a tonne of silt out of the pipes before reconnecting them to two new 100mm main drains.

“Despite a slow start due to bad weather and the subsidence of some areas of main drain trench which needed digging out by hand, the Ecosol team worked tirelessly to catch up,” said Marcus “and have done a thorough and excellent job.”

Secondary drainage was required to maintain percolation of rainfall and sprinkler water from the surface through the soil profile and quickly into the drains. To that end, we employed the Super Trencher to install 50mm sand and gravel slits at 1m centres perpendicular to the herringbone laterals.

After that, the BLEC Sandmaster was used to install sand bands at 26cm centres to further improve surface infiltration.

With the new drains working well, the annual renovation programme could begin. The 90t of sports sand top-dressing was ameliorated into the surface which was then levelled and seeded in four directions with Barenbrug Elite Barpersie seed.